easy-drawing-lessons.com
Every human is an artist

The Grid Drawing Method Was Used by the Old Masters and it Will Make You More Confident When Creating Your Outline.

Here are the things I'll cover for the Grid Drawing Method: 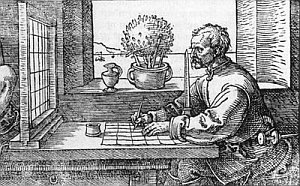 The grid drawing method, along with several other mechanical aids, have been used by artists for hundreds of years.

Many of these artists considered the use of the grid a trade secret. Leonardo da Vinci was just one of the many artists of his time who used the this method for developing an accurate outline of live subjects.

A frame with string or wire was tied horizontally and vertically in such a way as to create a grid. The device was placed between the artist and the model so that the artist could see the subject through the device, enabling the artist to transfer what he saw onto a grid that was drawn on to his paper. Directly in front of the artist's face there would be a kind of "sight" that he would put his nose up against. This would keep his line-of-sight consistent throughout the session. When he was finished with the outline he would complete his painting by using the outline as a kind of map.

You can actually still get a modern version of this device called the The Dürer Grid.

The method we'll use here is a variation of the method that was used by the masters. Whether you're drawing cartoons, animals, flowers or faces... the grid method is the most accessible way of drawing an outline.

Be prepared to hear other so-called artists insist that those who use this method, or any other drawing aid for that matter, are in some way "cheating". I'm not sure what their motivation for this might be. You might ask them to do some research on the subject before sharing any opinions on the subject. I don't imagine that they would call Leonardo da Vinci a "cheater".

After using a grid to create an outline, it's then just a matter of completing your piece using whatever medium you prefer.

You can help to keep this site online by making a small contribution.

All content is copyrighted ©, 2020, Jeffrey Lynn Rutledge.  All Rights Reserved
No part of this site may be copied without permission.

Amazon affiliate disclosure: Jeff Rutledge is a participant in the Amazon Services LLC Associates Program, an affiliate advertising program designed to provide a means for sites to earn advertising fees by advertising and linking to amazon.com.

Easy-Drawing-Lessons.com does not sell any personal information.